I was, still am, one of those who thought there was something strange going on, laws of nature and fortune notwithstanding.  But even considering whether the Patriots had turned to the dark side of professional cheating didn’t make me lose sight of the hilarity of the whole thing.  I mean what, squishy balls, come on.

On one hand, it was darkly comical and somewhat risqué.  To watch Bill Belichick on the podium at times uncomfortably relating how much he’d learned about balls showed that even he appreciated the indirect humor as well as the oblique accusations he needed to 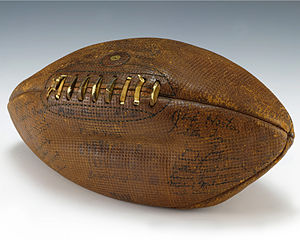 College football signed by Gerald Ford, eventual President of the US. It emits a history and integrity the NFL wants to endure.

On the other, this scandal-in-the-making took off because of the fair play culture of professional sports; that and because it involved a team known to straddle the fence-or cross the line, depending on who you ask-and had been involved in shady doings previously. It was a very pat and convenient situation; almost too pat if you ask me.  It even comes with its own sacrificial lamb willing to take one for the Gipper.

Given this juicy pregame blather, I wondered what was it that the NFL really didn’t want us to look at; especially since this week the whole world had been watching.  And then it came to me.  As Colombo had once implied, it’s not what’s there, it’s what’s not there.

Last year, something mildly historic happened in Philadelphia, and it’s that quixotically significant occurrence that’s been missing from the public consumption this past Super Bowl Week.  In July of last year, US District Judge Anita Brody granted preliminary approval to a settlement agreement between the NFL and retired players seeking damages in their concussion class action litigation.

It’s significant because after so many attempts at misleading the medical community and the public, the NFL was finally made to come to terms with the nature of the game and the league’s past failures relating to on-field concussion policies as well as its ongoing responsibility to all of its players, both active and retired.

It’s further noteworthy because for all the good that the settlement provides, it strangely affords no degree of protection for a vast majority whose illness, CTE, was the major impetus of the litigation in the first place.  While the settlement affords medical protection to the victims of Alzheimer’s, Lou Gehrig’s disease and other neurological disorders-under NFL concussion data, 14% are predicted to contract Alzheimer’s or dementia-it doesn’t cover individuals who might wind up suffering from CTE as the settlement doesn’t award players who contract chronic traumatic encephalopathy after July 7, 2014 nor those earlier without the qualifying symptom of cognitive impairment.

During his press conference, Commissioner Goodell fielded questions concerning the integrity of the league, personal conduct policy, franchise opportunities abroad, Super Bowl ticket price fixing and multiple ones concerning Deflategate.  Aside from his initial statement eluding to safety improvements the league’s made, aka among other things appointing a chief medical officer, and how such attempts would impact parents’ concerns for their children playing the game, there was no other mention of concussions or the concussion settlement or the questions that the settlement ultimately raised.

Such a discount leads to the fundamental questions of why.  Mainly, why aren’t all players covered in the settlement, with no limitations, past, present and future?  Wasn’t that the purpose of the litigation; to provide relief and protection to all related parties past, present and in the future?  And why aren’t we talking about it more?  Even with its issues, it’s still an impressive piece of litigation.  So why isn’t the NFL touting its own horn about bringing it to fruition?  And, are the mainstream sports media being kowtowed into virtual silence?

You get the idea that even if it was no more than a fundamental misunderstanding, the chance to get some real answers to questions may be fading fast with the setting sun. Tomorrow’s the game and afterwards, everybody’ll go home.  That window of opportunity for maximum disclosure is just about gone; which is just how the NFL may have planned it all in the first place.