That Box on the Shelf 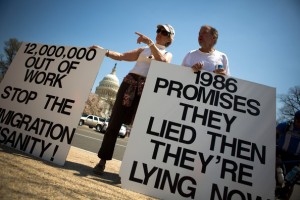 Political promise of immigration reform should truly fall on deaf ears, regardless of the party.

I’m pretty sure every house has just such a box, at least one of them somewhere inside.  It’s probably gathering dust guarding treasures of the past; a doorway into happier times or periods of tribulation.

It could hold a vast array of personal information.  Tax time is approaching and many of us, having systematically captured the essence of an entire year of our lives, now keep it readily at hand, in a cigar or shoe box.

Mine is neither a box of memories nor is it a way to hopefully fend off the duties owed the taxman but it does include something insightful from years ago.  The box is labeled Torn from the Land and contains a few printed articles from that acclaimed series by AP reporters Dolores Barclay, Todd Lewan and Editor Bruce DeSilva.

But it also contains others in a similar ilk; one in particular being pertinent even 14 years later.  It’s an expose by Mirta Ojito entitled, Best of Friends, Worlds Apart and first appeared in the How Race is Lived in America series of the New York Times.  The stories relate personal racial interactions and tell the way those relationships shaped the lives of individual Americans in one fashion or another.  It’s this laying bare of the country’s overwhelmingly human dynamic that could be useful to us as we move forward with a new Republican-controlled Senate in place after the mid-term elections.

Such accounts are relevant because already hanging over the heads of ordinary citizens is the threat of government upheaval over immigration reform.  And where there’s talk of immigration, there’s also concern for race and the implications of adding citizens to the already overflowing melting pot.  Like it or not, the two go unescapably hand in hand.

Maybe that’s the whole problem; I mean it is, after all, called the Human Race.  Of course, you don’t like to think that these past centuries of upheaval, bickering and death were caused merely by the slip of an anthropological tongue.  Obviously, there’s a bit more to it.

I’m of a mind that a fair and viable solution to immigration reform won’t be a political one determined by any sole party’s will.  Nor will it come from those Americans with nationalist or overly liberal tendencies.  A fair solution will be one that no American, Black, White, Latino or Asian, Republican or Democrat, conservative or liberal will be fully happy with. You know you’ve got a winner when you’ve ticked off everybody.

So, when reading Ms. Ojito’s piece consider not only the lives of Joel Ruiz and Achmed Valdes but also the lives of their children.  Think about the types of relationships they’ll forge and the manner in which they’ll do so.  Race, in all of its bitter glory, is something that faces all Americans today.  It’s an ongoing issue and achieving good race relations is a work-in-progress.  Read the story and ask yourselves:  Why add to the difficulty?

Filed under Life and Society, Opinion, Politics and Government