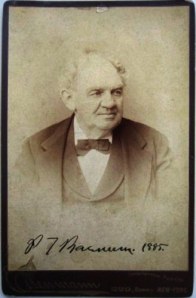 And the ironic thing: there’s no place in history that says Barnum made that sucker comment.

Like it or not, we all become part of that hackneyed, commercial society that exists seemingly at the behest of this franchise or that corporation.  In a severe case of the tail wagging the dog, most times it seems like we do so solely for their consumption rather than vice-versa.

And today’s rampant commercialism is always accompanied by a cliché; some sort of over-used phrase, sentence or catchy jingle that proliferates on the airwaves.  Funny thing about those creating today’s commercial banalities; they haven’t met a demographic that they don’t like.  Consequently, each of us, regardless of age, income or social status, is subject to attain ownership of these colorings, whether we want them or not.

Over time, I’ve acquired a most over-used cliché, one especially geared towards that senior segment.  Perhaps you own it as well?

But seniors aren’t the only ones out there getting such attention.  Today’s salesmanship covers all the bases.  There are no age or status concerns as each of us seemingly has something that the other wants; aka our money, time or consideration, however little of it there is going around.

“If you or a loved one has been diagnosed with (insert ailment here), call the law offices of (insert name of attorney here), you might be entitled to compensation.”

Clichés today are rather personal as no subject is taboo.  The more embarrassing it is the better and more poignant it plays on the television.

“If your son was prescribed the drug Risperdal and has developed Gynecomastia (female breasts), call the law offices of (insert name here).”  As if his high school gym class wouldn’t be torturous enough.

This next one is a personal favorite of mine.

“Ask your doctor if you’re healthy enough for sex before taking Viagra.”

I don’t know about you but I’m of the hope that my doctor would already know whether or not I’m healthy enough to have sex and would address that when I first ask him; but that’s me.  Clichés always afford their creators, and those who reap their benefit, some appearance of a waiver of liability.

Truly a generic form of expression, the same copy is more than suited for use in countless types of circumstances.  You can find fast relief from the pain of hemorrhoid tissue and at the same time fight psoriasis, shingles or some other nefarious lurking disease, all the while using the same wording.  Don’t tell me that there’s no recycling going on somewhere in some studio.

So what does this all mean?  I’m not sure but one thing is somewhat clear; we’re becoming a society that loves the pitch.  We’re drawn to it; its smooth, verbal allure capturing our hearts minds and most importantly to some, our wallets. The concern lies in our ability to spot the charlatan or rogue out there and avoid becoming the punchline of that famous Barnum quote.  Other than acknowledging that, I guess we’ll have to wait and see what happens; which is cool since many of us are still waiting for that next big thing.