A momentary lapse in hygienic reason

Today, I read a CNN article concerning the “Worst men’s grooming trends of all time”.  Click on it and you’ll see some rather disturbing stuff (Seriously? Radium on your testicles?).  But on the other hand, looking at the list makes you chuckle at how far we’ve come over the centuries.

Men have always looked for an edge with the ladies; as if anything other than being decent, respectful and clean would make that much of a difference.  OK, for the sake of those concerned with all things monetary, I’ll even say it helps to have a bit of change in your pocket.  There, Ka-ching!

But for the most part what women appreciate in a man hasn’t really changed that much over the years, has it?  Men hear words like “Alpha male” and we go all unnerved but the term essentially indicates a standard that, if you’re happily attached to someone at the present, you’re already living up to it.

Women expect to be nurtured; themselves as well as any offspring that are produced.  It stands to reason then that women expect to have sex with the man they’ve chosen.  The man should have the ability to provide a suitable home for her and her children, be somewhat driven with a decent work ethic that  he can instill in those children and finally, be clean and free of disease; another standard that I’m sure she hopes he’ll  impart to their descendants.

But recently, in this modern age of metro sexuality, there was a trend that bucked that standard and one that, I’m happy to say, seems to have fallen by the wayside.  Anybody remember the original Axe sprays? 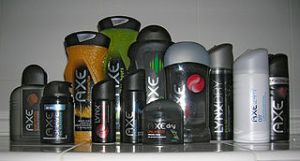 I remember them being marketed as something to put on in lieu of taking a bath or shower.   Believe me, I cringed when I first heard this because, I’m sorry to say, young men have always pushed the envelope when it came to such things, i.e. bathing before putting on fragrance, and they didn’t need any sort of push to do so.  This was a different campaign though.  The product was sanctioned by the manufacturer as being safe and hygienic and something to really wow the opposite sex.

Since its American start-up, Axe not been without its own issues regarding such things as young pubescent men vie for the affections of the young ladies.  The Huffington Post reported that a Brooklyn school was shut down following reports of a noxious odor that was found to be Axe body spray.  In another incident, a Pennsylvania high school student was sent to the hospital with a severe allergic reaction to the spray, prompting school officials to prohibit its use while in attendance.

It seems to me all of this could’ve been avoided with one simple caveat: Wash before using and use sparingly!  OK, I’ll admit saying to use sparingly should be a prohibition that comes from the man of the house.

Still, it appears the makers of Axe have forgone their previous, unsanitary marketing strategy for one a bit more aesthetically pleasing to the senses.  I remember an episode of Queer Eye for the Straight Guy where when encountering a horde of creams and ointments in one man’s medicine cabinet, they asked him what was his particular ailment.  He replied that he gets a lot of rashes.  To which they countered, wash more.

Now that’s a scentiment that I can stand behind.